A couple of weeks ago I started on another pandemic-inspired genealogy project. While it didn’t lead to a fully conclusive result, I did learn some interesting things along the way.

I have always wondered whether the black Bembrys who come out of eastern North Carolina are connected to “my” Bembrys. As Bembry is such a unique name, you would think there would be a connection. But in fact, unlike in Georgia, where the paper trail clearly connects white Bembry former slaveholders with emancipated black Bembrys, there is no clear link.

I know that the last white Bembry left North Carolina by 1835. That was Miles Bembry himself, who, well into in his 60s, sold all his holdings and followed three of his sons to Georgia. (It is worth noting that his departure coincided with the imposition of much stricter race laws in North Carolina. There is evidence to suggest that Miles himself was of mixed racial heritage: he may have departed at such an advanced age in order to be avoid being reclassified as black.)

I have found exactly one Bembry connected to my family in North Carolina in 1870. Dempsey Bembry was sold by Thomas Bembry in 1843 in Dooly County, Georgia to settle debts. His age and (somewhat unusual) name match a Dempsey Bembry who is found in Scotland Neck from 1870-1875. This is in the area where Miles Bembry owned a plantation, and so it seems very likely that Dempsey returned to North Carolina to rejoin family after emancipation. 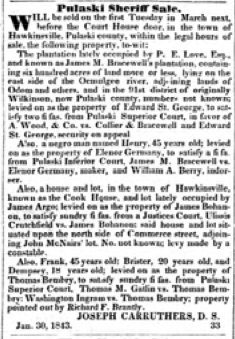 However, there are also dozens of apparently unconnected black Bembrys found in the Edenton, North Carolina area after the Civil War. This is not all that far from Scotland Neck, but it seemed a little unusual that they would choose to use the surname of a former slaveholder who had left the state at least a generation prior to emancipation. Not impossible, but not the most obvious answer.

Given that my working theory is that Miles originally came from the Edenton area, via the McKenzie and Thompson families, I wondered if they might be distant relatives, either through a white or black common ancestor. In other words, perhaps both families had been using the surname for decades, one side legally and the other informally, under slavery.

My father does have one distant DNA cousin who descends from the Edenton group of Bembry families. However, that connection doesn’t prove much. Given that almost everyone in my father’s line came out of North Carolina at some point, she could easily be related to us in another way. It’s also a bit strange that there are no other shared matches. Although that doesn’t completely invalidate a match that would probably go back to the 18th century, it does cast some doubt.

Nevertheless, this distant cousin was as good a starting point as any other. So, I tried a new research method. Morning Bembry, my cousin’s ancestor, was buried in the Vine Oak Cemetery in Edenton along with a couple of dozen other Bembrys and Bemberys. Using these individuals as starting points, I built skeleton family groups for each one. Most of them quickly connected to each other, and to one common ancestor, Leon Bembry, born about 1822. Other lines began with Augustus Bembry, Charles Bembry, Dave Bembry, Fanny Bembry, Shadrack Bembry, Craven Bembry, and Samuel Bembry, many of whom were likely related to each other.

One spelling variation stood out, however: Benbury. There was a large, wealthy white Benbury clan in the Edenton area in the antebellum era. In fact, I once thought that Miles might have started out as a Benbury. However, we do not have one single match to anyone with Benbury in their trees on any DNA site, so I have ruled that out.

But were these black Edenton Bembrys connected with the white Edenton Benburys?

It did not take long to figure it out: looking at the 1870 census, I found Leon, Augustus, and two other black Benbury heads of families on the same page as a wealthy white man named Lemuel Benbury. He was also found on the 1860 with a net worth five times of his worth in 1870, indicating a slaveholder. Ancestry trees showed him as the son of a Thomas Benbury: this was confirmed by a probate file helpfully posted to his profile by another user. The probate file also included a letter (PDF here) dividing Thomas Benbury’s slaves amongst his heirs, the names included many of those found on the same page as Lemuel in 1870 as well as others found in Vine Oak Cemetery.

So, unless by some wild coincidence the black Bembrys had acquired their name for some other reason than being held in slavery for generations by the similarly-named white Benburys, their name was clearly a variant of Benbury.

It’s worth noting that one enslaved black Benbury had already settled on Bembery before emancipation. Not only that, he was literate enough to sign his name! Leon Bembry Jr., brother to the Morning Bembry who got me started on this project, escaped from slavery and was living in a refugee settlement on Roanoke Island, off the coast of North Carolina, in 1862. He signed a letter requesting additional fishing time which I will include here just because it’s so interesting.

Leon Bembry also served in the 36th U.S. Colored Infantry from 1862 until 1866, with assignments as far away as Brazos, Texas, before returning to Edenton. There is no doubt a very interesting story there! His file can be found on Fold3 under “Leon Pembry” for any descendants who may be interested.

Probably the best known of the Edenton Bembry clan is John Elton Bembry, who was a mentor to Malcolm X. While his exact connection to Leon Bembry remains unclear, John Elton’s parents, Joseph Clinton and Eva Lee Bembry are buried at Vine Oak Cemetery, along with his grandmother, Betty Edney Bembry. So, he is almost certainly another descendant of the group that was originally enslaved by Thomas and Lemuel Benbury. (Read a great article about John Elton Bembry here.)

And so, it does not appear that this group of Bembrys are related to “my” Bembrys. But it is a certainly a very odd coincidence that they eventually settled on the same unique surname as a completely unrelated bunch of people in Georgia! And there is that one cousin match to consider…

Sometimes you have to research a theory just to rule it out. That appears to have been the case here–at least so far. I’ll keep my Edenton Bembry “research tree” on file just in case new information appears.

Regardless of the final destination, it sure was an interesting side trip!