When I started this blog, several years ago, I did not know that records of slavery would end up being such a big part of it. This was partly because I had no idea how many of my ancestors were slave holders! But it has become more and more important to me to share these records online. Here’s why.

I wrote a while back about how I did not feel my family history was complete with documenting both the slaveholders and the enslaved. I still feel that way: if a person engaged in slavery, from a strictly historical point of view, that is a primary fact about them that should not be ignored, or “whitewashed.”

Furthermore, those enslaved people were some of the closest associates of the slave holders. Though the relationship was twisted and unequal, they lived right next to each other for hundreds of years. Southern culture didn’t come out of nowhere: from food to music, it was as heavily influenced by Africa as it was by Europe. If we want to understand how our white southern ancestors lived and developed the customs that they had (and still have), we have to learn about how the large African-descended population lived as well.

For the last couple of years though, I’ve had another reason for posting all this information. That is simply because it is true.

Oh, honey. Do a little research. If your family was here before 1865, you can bet that they had something to do with slavery. Maybe your 3g grandfather who left for Oregon after the war ended was born on an Alabama plantation. Maybe your 4g grandmother in Georgia was gifted slaves “for love and affection” on the occasion of her marriage. Maybe your 4g grandfather, the New York City banker, offered mortgages on human beings. Maybe your 6g grandfather in New England was a slave ship captain, or a sugar importer.

The early economy of this country was hugely dependent on slavery. There was almost no way not to be involved in it. Just wearing a cheap cotton shirt tied a person to slavery. Several presidents held slaves, for heavens’ sakes. And, even if your entire family arrived on Ellis Island at the turn of the century, they still benefited from white supremacy—which was the legacy of slavery. (And no, the Irish weren’t slaves.)

I won’t speculate here on the reasons that white people feel the need to cling to these stories. But I do know that this storytelling has gotten completely out of control over the last two or three years. Reality has become optional, populated with “alternate facts.” I’ve even seen it on genealogy groups, which are supposed to be about researching facts. Well, some of them are, anyway.

So, right now, the truth feels very important to me. And these buried records, with the raw, disturbing, facts of slavery, are part of the essential truth of this country.

These records do not provide any solutions, and I wouldn’t presume to suggest any. I’m just an amateur genealogist, not an activist or a policymaker. This is not a political blog, nor is it about to become one. I do genealogical research, and I’m getting pretty good at it. That’s what I have to offer.

I do know this for sure: the way forward does not start with the stories we white people tell ourselves.

It starts with a sweet dose of truth. 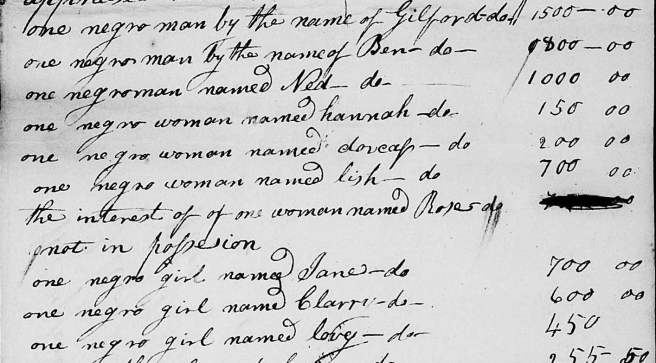