The Reverend John McKenzie of Suffolk Parish, Nansemond County, Virginia wrote a will in 1754 in which he named his children; John II, Kenneth, Janet, Anne, and William McKenzie. The Reverend gave various tracts of land in Tyrrell and Bertie counties, North Carolina to his sons, and also specified that “my Negroes shall not be Divided during the Minority of my Children.”

The Reverend died some time before 1756. I have been unable to find any of his estate files, except for a record of the sale of an astonishing quantity of rum. His family appears to have relocated to his lands in Bertie County, North Carolina after his death.

In 1775, the last of McKenzie’s children reached the age of majority and the “Negroes” were divided, resulting in this record from Bertie County probate files. 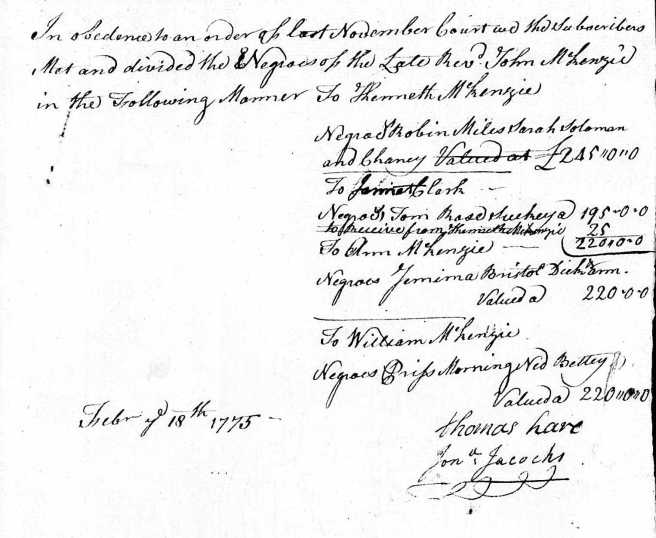 The Reverend’s son, Kenneth McKenzie, Esquire, a prominent businessman and politician, died in 1784. He does not appear to have married, and he had no children. His brief will leaves all his property to his brother William McKenzie, his sister, Ann Darlet, and his four nephews that were being raised by William McKenzie after the death of their mother, and the skedaddle of their father, the shipmaster and merchant, Colin Clark. Their names were David, William, Kenneth, John, and David Clark (all adopted the middle name McKenzie).

William McKenzie was the adoptive father to the four boys, therefore, five out of six of the new holders of Kenneth’s slaves lived together on William McKenzie’s plantation in Martin County, North Carolina, just down the Conoho Creek from the Needham Bryan clan–to which they were most likely related through the Reverend’s wife, Janet Gray.

About 1789, Miles Bembry married Needham Bryan’s daughter Nancy Ann. In 1793, the couple inherited both their first recorded tract of land and their first slave, Hannah, in Needham’s will.

In 1800, Miles Bembry was very likely working as an overseer for a close associate of the McKenzies and Clarks, Lewis Thompson, just across the Roanoke River in Bertie County. And by 1813, he was definitely working for David McKenzie Clark in Scotland Neck in nearby Halifax County. In the meantime, Miles acquired several tracts of land and up to 20 slaves of his own.

Miles and Ann Bembry had four sons, naming them John, William, Kenneth and Thomas, three out of four of the Clark boys’ names. In later years, the true Clark family story: a Scottish Tory shipmaster marrying an Scots-Irish woman and abandoning his family, his sons then being raised by an uncle and aunt after their mother’s death, somehow became associated with the Bembry family. The shipmaster became English (he was a Tory, after all) and the woman became Irish, as Annie Bryan probably was, otherwise, it is the same tale. But there is absolutely no evidence that “John Miles Bembry” the English shipmaster, ever existed.

It seems pretty clear by now that Miles Bembry had some kind of connection to the McKenzies and Clarks. My working theory for some time has been that he was a relative  or perhaps an indentured servant who made something of himself after his contract was up. I do have both Clarks and McKenzies in my paternal DNA matches, for what that is worth, and my father’s Y-DNA strongly indicates Scottish ancestry. It would not surprise me at all to one day find that we are actually McKenzies.

But there is also a good possibility that Miles had some African ancestry. Both DNA and documentary evidence definitely lean in this direction. And now that I’ve seen the name Miles on a list of people enslaved by the McKenzies, I have questions!

Miles was not the most common of names for white people, let alone for the enslaved. So, if the name on the inventory above is a coincidence, it is a remarkable one. However, it seems that it would be very unusual for an enslaved young man to not only be freed but to pass for white in the same neighborhood where he had once been a slave.

Here are the possibilities as I see them, in order of likelihood.

1.) This is just a coincidence and not the same Miles at all.

2.) This is the same Miles, he was enslaved, and for some reason–perhaps because he was a McKenzie or Clark by birth–he was both freed and considered to be legally white by 1790. Unfortunately, the Martin County court records that might help answer this question were burned in a court house fire. I am not sure where else to research this possibility.

3.) This is the same Miles, and he was not actually a slave, but an indentured servant who may or may not have have mixed ancestry. Indentured servants could be inherited for as long as the remainder of their contract. However, they wouldn’t have normally given a monetary value as these slaves were. So, I don’t think this theory is very likely unless this document is just a mix-up, which is not impossible.

4.) Some other crazy thing that I haven’t thought of yet!

It seems pretty unlikely that Miles could have gone from being a slave to an overseer to a slave holder himself, not to mention from black to white, in one generation and in one small area of North Carolina. But on the other hand, given all the other information that I have, I can’t just ignore this document, either. Miles had to come from somewhere, after all, even if he seems to have popped up out of the Conoho Swamp in 1790.