Recently, I wrote about how Kenneth apprenticed a free boy of color named William Williams. Well, of course I had to find out more about his mother, Fanny Williams! Which led me into an entirely new (for me) area of genealogy: that of “free people of color” in the antebellum South.

Fanny Williams deeded her son to Kenneth Bembry, his presumed father, in 1832. In the deed, she is a “free woman of color.” That is pretty amazing because in 1830, per sources I found online, there were only six free people of color in all of Leon County.

In browsing the 1830 census records, I did not find Fanny. This could be an oversight, of course–Florida wasn’t even a state yet, after all–or it could be that she was freed between 1830 and 1832, possibly by Kenneth Bembry.  Or she could have been living under another name, or with a man who had a different last name. (I looked for more deeds in her name, and did not find any of those either.)

I did not find her in 1840 either. However, Fanny was easy to find in 1850. She is living  as a free woman of color in Division 8 of Leon County, the same section as Kenneth. She was born in North Carolina in 1802, and has four “mulatto” children, Manning (Emanuel), Georgia Ann (Georgianna), Polly, and Francis (a girl). Manning, Georgia Ann and Francis are born in Florida in the 1830s, while Polly is born about 1825 in Georgia, a year before William was. Assuming Polly is actually her daughter, Fanny may have lived there before Leon County.

Manning is listed as a bricklayer, which probably indicates that he was also apprenticed as a boy. He remains a bricklayer or brick mason in later records. He married a woman named Lucy in October 1866 and a very interesting record from the Freedman’s Bank in her name contains much more information about the family. 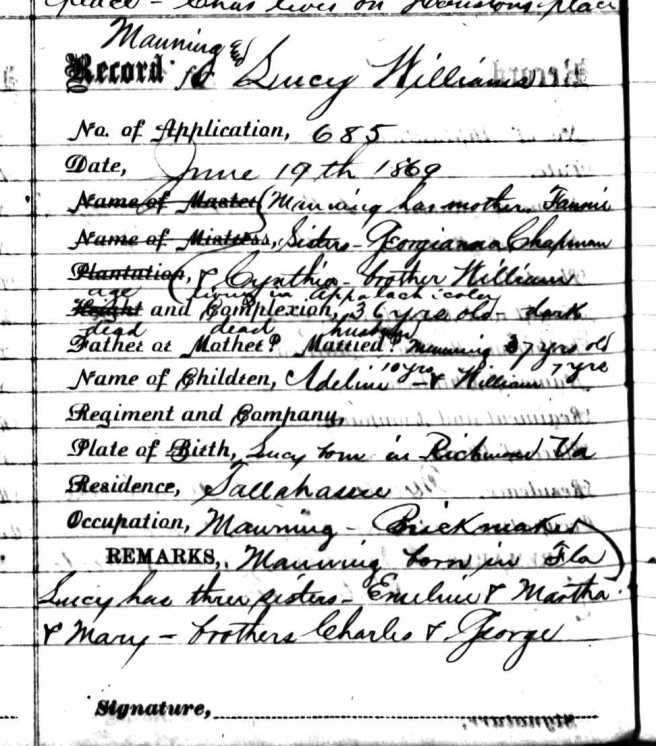 Manning (or Emanuel) is last found in Tallahassee in 1880, again listed as as “mulatto” along with his children.  I can’t find any record of him or his children after that point.

Georgianna married Thomas Chapman, a “free man of color” in 1852 in Leon County. That is the last record I have found for her, and I have not found further records for anyone else in the family. The document above says that some (or all) of them moved to Appalachicola in nearby Franklin county: I have not found any record of them there, either.

Kenneth had two white wives, but in an era when women of any color normally had a dozen kids, he had only one child by Mary Mayo. Both appear to have been business arrangements: he “married up” in both cases, first to one of the wealthy Mayos of Edgecombe County, then to Mahala Hall, who inherited a lot of property from her father that pretty much financed Kenneth’s lifestyle for many years.

It seems very possible to me that most or all of Fanny’s “mulatto” children could have been Kenneth’s, the result of a long-term relationship. Despite the fact that Kenneth held a number of slaves, and regularly bought, sold, and even mortgaged them. (More on that once I get the records organized.)

How the minds of white men of the time worked will always be a question to me! But I have others, as well.

I wonder if some Fanny’s children disappeared from the record because they were able to pass for white? I have run across a couple of marriages that could be them, but they are not listed as “colored” as they normally would be at that time.

Another possibility is that some of them moved out west or up north after the war. It seems like they may have had the means to do so. And they may not have been particularly attached to the name Williams, either, especially after Fanny (presumably) passed away.

I also wonder if it was known around Tallahassee that Kenneth had a “colored” mistress, and this was one reason the planter class turned up their noses at him when he got too big for his britches?

I would love to know more about this story, but I seem to have hit the wall for the present. I’ll bookmark this problem and come back to it later, though, for sure!