Latest project: browsing Leon County, Florida deeds. I am doing this both to fill out some information on William and Kenneth Bembry, and because I know that my ancestor, Thomas spent some time there.

Kenneth Bembry’s property records are complicated to say the least. This is the first time I have run into deeds that involve transactions between three people! In one case, the original owners are “not to be found” and Kenneth snapped up their land. Quite the smooth operator.

But, this deed seems pretty simple to me. 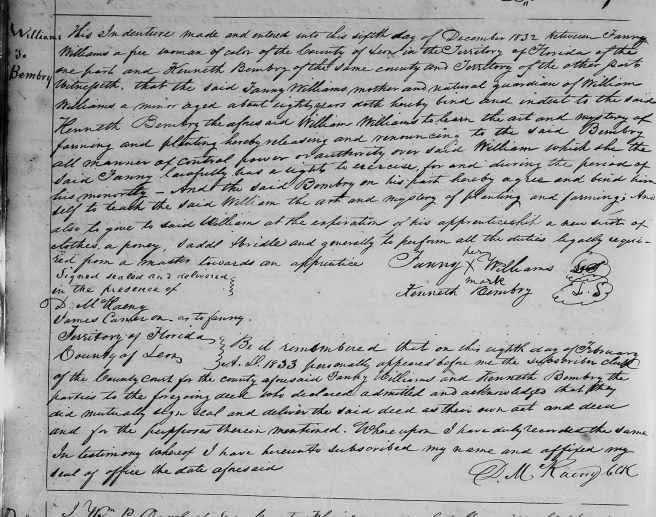 And the said Bembry on his part hereby agree and bind himself to teach the said William the art and mystery of planting and farming; and also to give the said William art the expiration of his apprenticeship a new set of clothes, a poney and saddle + bridle and generally to perform all the duties legally required from a master toward an apprentice

Kenneth Bembry, owner of a large farm with many enslaved workers, did not need more eight year old farmers on his plantation. And I am pretty sure none of his other workers got a “poney and saddle + bridle” for working in the fields!

James Cameron was likely Kenneth’s overseer, charged with teaching William how to have some kind of supervisory role on one of Kenneth’s farms in the future, probably  the best option available to a free man of color in the south at that time.

I’m going to go out on a limb and say that William was Kenneth’s son by a Fanny Williams, a free woman of color in Tallahassee who knew how to look out for her kid. Good for her!