When Thomas N. Bembry died in 1904, his wife Sarah Ann was left close to penniless. A paper trail found in the Florida State Archives outlines this illiterate woman’s attempts to receive support from the state of Florida.

On January 8, 1905, Sarah wrote to the state comptroller apparently trying to receive the balance of Thomas N’s pension. This letter is not included in the file, but, a copy of the letter she received in return states that she needed to send in a certified letter order signed by ALL of Thomas’ heirs in order to receive the money. It is unclear whether she managed to accomplish this.

The letter also advises her to apply for an indigent widow’s pension, and this application is found in the files.

Two witnesses named Revels and Mobley testified that she was the the lawful wife of Thomas N. Bembry, a person of “respectability and good reputation,” had never remarried since Thomas’ death, and was receiving no income from any source.  This pension application was approved on October 26, 1905.

For some reason that is unclear to me, she re-applied for the pension in July 1909. She appeared before a the Suwannee County court in July 1909 to testify that she owned no more than $25 in personal property. She managed to corral two witnesses as well, her son-in-law, John Lee, and Sanford Bonds, probably a neighbor. They all signed with an “X.” She was granted this pension from July 1909 onwards.

In her affidavit, she states that she was married in “1840-something” and that she “does not remember the year.” She says that she has six married children, she does not know their earning capacity, and that they are unable to support her.

In May, 1912, at the age of 82, she attempted once again to receive more pension funds as well as the those that were not paid in the gap between when Thomas died and when she first applied for the pension. The text of the tartly worded letter, dictated to a neighbor, is as follows.

I am writing to you in regards to my pension. (I am 82 years old.) I am very feeble and am nearly blind and am perfectly helpless. My husband who was in the Confederate Army died September 21 1904 and it was something over a year before I began to draw a pension.

Now the records will show these facts, Now Mr Knott! Is it not possible for me collect that back pension of over a year? Please help me to collect it as I deserve it and am in sore need of it. And again! I am only getting $30 every quarter. Does the law not provide more or does it not.

Please investigate this matter and help me all you possibly can and I will be greatly indebted for your kindness.

Hoping to hear from you in regards to this matter at an early date.

I am Yours Very Truly 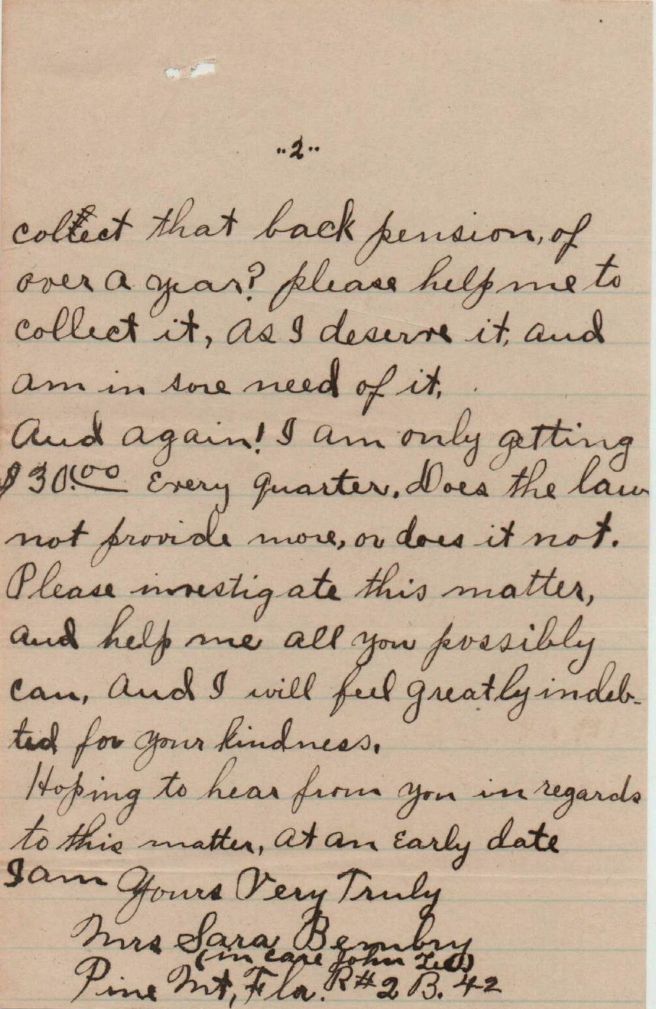 However, this payment was denied. Apparently, Sarah did not understand at the time that she had 90 days after Thomas’ death to apply for the pension. As she missed that opportunity, the back pension was permanently denied to her by the state.

Though the correspondence shows that Sarah lived until at least 1912, I am unable to find her on the 1910 census. I can’t find John and Minnie Cornelia either, nor her other daughter Laura Jo Wrede, who I know also lived in Pine Mount, just up the road from McAlpin. It appears that the community was simply skipped in both 1910 and 1920, or that the files were destroyed. But, judging from the address on the letter, it is likely that Sarah was living with her youngest daughter Minnie Cornelia Lee in 1910.

Sarah died some time after 1912. She has no grave marker, but was probably buried with Thomas at Friendship Baptist Church Cemetery in Live Oak.